June 12, 2017
Sometimes you just have to sit back, accept the situation, and let things happen. I’ve never missed a day of shooting or been absent due to illness since I worked in the public sector – which  has an unspoken culture of having sick days as part of the annual complement of time-off. That’s another story.

Back in the autumn of 1987 in an office on Buckingham Palace Road, I was working an evening shift as an ops manager in a bureau de change firm. The counter-phone rang, and as I got up from my chair to answer it, I felt the most sudden, intense pain in my groin, and doubled up. It didn’t subside for ages, and I failed to do anything about it until the following year when it was diagnosed as an inguinal hernia – basically part of the intestinal tract had pushed through a weakness in the muscle wall, causing a protrusion. A few weeks later I was referred to hospital, and as it was a beautifully sunny day on the morning of my consultation, I decided to walk the 3 miles. Once I got there, my protrusion had vanished, and the doctor was unable to find anything. I was discharged from the waiting list and advised to return to the GP if the condition recurred. Obviously it did – on many occasions. The hernia popped out and vanished as if it were a cruel game of medical “whack a mole”, and I grew to live with the condition over the following years. It began hurting eventually, and when it grew to the size of a grapefruit in my early 50’s I knew it was time to bite the bullet and get it sorted. No problem with diagnosis this time, as the consultant took an iPhone shot while trying to control her laughter, and sent it off to Guinness for verification of the world record – all while cupping my merry men and asking me to cough. (oh yes – that really happens). Unfortunately my late winter surgery date had to be scrapped due to Tina’s cancer treatment, and the opportunity for repair came at very short notice with a phone call telling me that there’d been a cancellation.

The 7th of June was scheduled, and I had a week to advise my clients that I’d be out of action for a few weeks during the busiest time of year for them all. I considered delaying again, but as I said, sometimes just accepting the situation is the best thing to do. The 7th came and went, the surgery went well, and I was told that the hernia was rather large. That’ll be the 30 years it’s had to develop then. 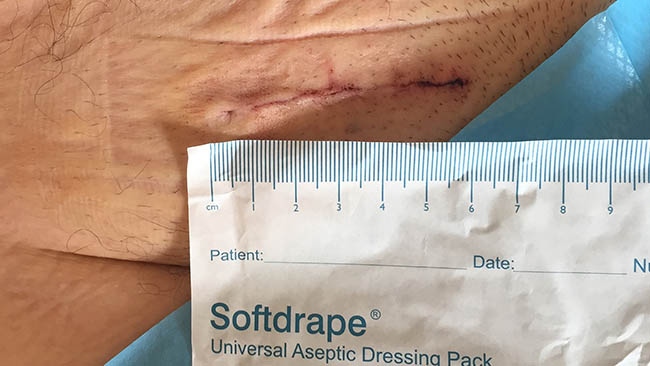 So here I am almost a week later. Devoid of income for the immediate future, unsure if my clients will hang about for me, or just find someone else to fill my boots. There’s absolutely nothing I can do but wait, recover, and use the time constructively. The pain is constant and not insignificant. A district nurse visits occasionally to apply new dressings, and I have to wear those compression stockings that your gran would wear to fly to Benidorm. The bruising and fluid collection has given me a sort of yellow and purple “pouch” at the front of my abdomen, and from the black and blue colour of my “old man”, it would appear that the surgical staff had been using it as a punchbag. Apologies for the grossness of the scar photo.

On the bright side, it’s given me the time to get my blog up to date. I’ve shot some bloody spectacular property since the last entry, and these will be scheduled regularly over the next few weeks. I’m off for a rest now. Peace be with you brothers and sisters.