June 17, 2020
Welcome back all. The surge in post-lockdown property photography has promptly stalled -after the initial boom caused by the backlog of jobs that had built up at the end of March. The holiday-let part of my working week continues to provide bits and pieces, but the bread-and-butter real estate stuff seems to have slowed down considerably. Out of interest, here'a graph showing my levels of revenue (sales) over the last 14 months. The two main troughs were caused by the current crisis obviously, and last year's few days off to have my neck operation. My income is heavily dependent on a small number of clients, and if any one of them goes under, or decides to drop me for a cheaper option, then things begin to get hairy. That's what happened at the end of 2019, when an upmarket Newcastle estate agency began to pile on the jobs, only to realise that it was actually costing money - resulting in a sudden reversal of policy. Probably a good decision considering current circumstances.

This job was shot just before the current crisis, was a bit unusual, and didn't start off in the most auspicious manner. Langham Tower just outside Sunderland city centre was part of the University for many years before becoming a private school. It was closed in 2016, and is now up for sale for a million quid. The building is primed for development as a hotel, and has a period residence adjacent to it with a hefty price tag too.
I arrived as planned, on a sunny, extremely windy Monday morning. My brief was.....well...brief, and all I knew was that I was meeting someone there who could let me in to the main building, and the occupied residence. I waited for 30 minutes, but nobody turned up, so I phoned the agent to determine what was happening. Unsurprisingly, they had no idea, so I knocked on the door of the occupied house as it had a car parked outside. The occupiers were actually the owners of the two buildings, and had no idea that I was planned to be there. Yet another waste of time, Tyne Tunnel fees, and petrol. With a fake smile, I arranged to be there a few days later, and headed home for a coffee and afternoon of leisure. 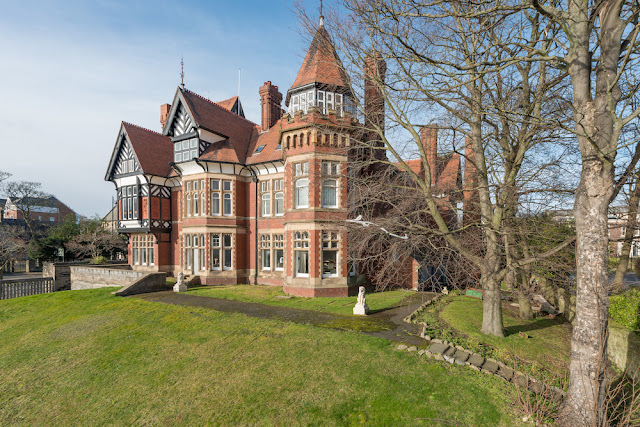 When the day came, it was yet another sunny & windy one. I packed the telescopic camera stand, knowing that the main building was set atop a steep mound with a fence directly at it's base, so I'd need some serious elevation to get the exterior shots I required. Before I got the owner, I had a look around, and discovered that every ground floor room was absolutely rammed with furniture. There was no way I could even begin to capture the huge reception rooms in all their Victorian glory. Once we got in, it became apparent that pretty much every room in the vast building was being used to store the stuff that had been left behind by the education authority, and there was no way of getting creative by shooting around it all. My only available option was to capture details. 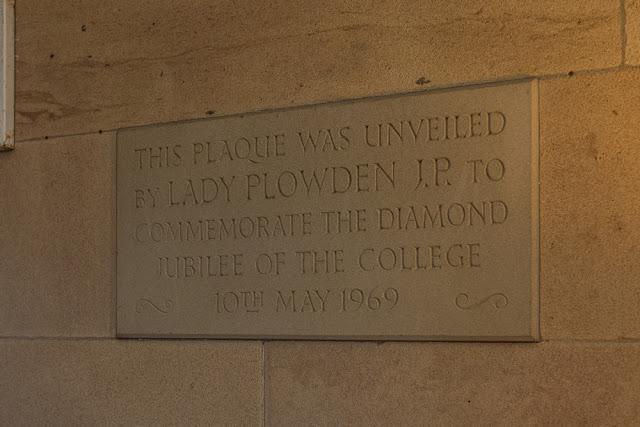 The main entrance hall was a requisite shot, so the owner and his pal had to remove as much junk as they could. We got it as clear as possible and I got to work in the huge space. The area was extremely dark, with only one source of natural light which overpowered everywhere else. The ceilings were panelled, the carpets were dark, and it was an overall nightmare. I decided to let the natural light do most of the hard work, and captured about 10 frames at f8 using half-stops of shutter speeds to get images ranging from very dark to very light. I'd opened the doors to the reception rooms to get some rays streaming in from the front as well.  The next step was to get the Godox AD200 flash, and illuminate loads of different parts of the frame at full power using 1/30th second at f8. This eventually gave me about 30 frames with all sorts of light qualities and levels with which to composite the final image. It was never going to be some artistic masterpiece, but it manages to show the space in it's entirety, with some idea of how the natural light presents itself. This process was repeated 3 times using different viewpoints. 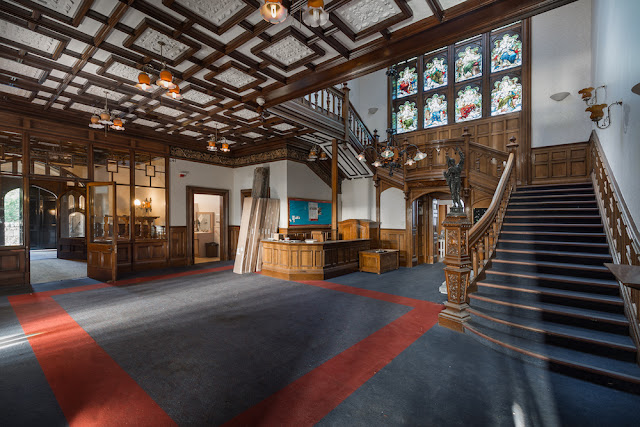 The main reception rooms were beautiful, but packed to the rafters with furniture. I could only shoot the ceilings, panelled walls, and bits of fireplaces etc. This doesn't do justice to the space - which desperately needs clearing. I used natural light, and directed pops of powerful flash to bring out the texture in the ceilings. 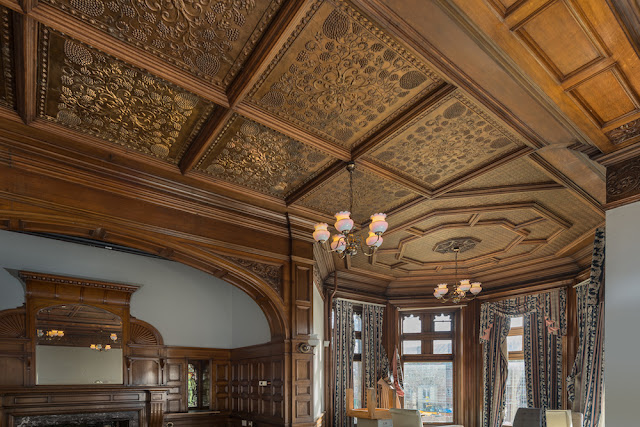 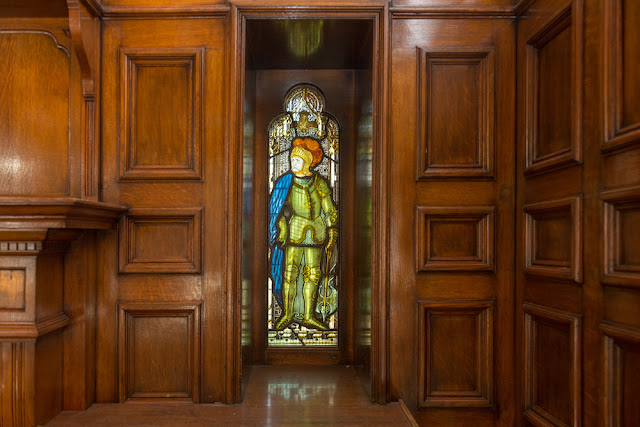 The building was a maze of corridors, staircases, and rooms of all sorts. There were wrought-iron spiral stairs, landings with giant chandeliers, stained glass skylights, and octagonal rooms leading to turrets, as well as old classrooms sporting beams, and brightly coloured walls. The potential for some sort of boutique hotel was massive, and some considerable investment would create something special given the existing architectural beauty of the building. 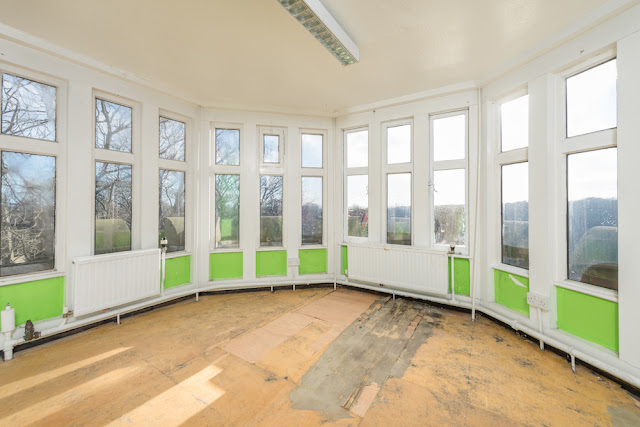 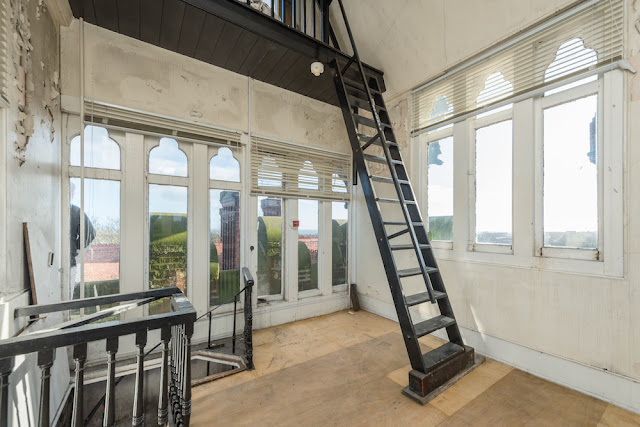 It only took a couple of hours to whizz through the place, and capture the main elements of the building. It was actually the residential property next door which took ages. By early afternoon I was ready to get the exteriors sorted. The pole went up, and several thousand quids worth of gear was quickly, and dangerously swaying back and forth at a height of 27 feet - anchored only by little old me. Doing elevated work in the wind isn't for the faint hearted, but the results look way better than those captured looking up at the building from ground level at close quarters.
Not a bad day's work in the end. Whether there's anyone remotely interested in setting up a leisure or hospitality business in the next few years is anyone's guess though - fingers crossed for them.
Brian Young shoots all aspects of the built environment for a range of clients throughout Northern England and the Borders.