April 16, 2021
Stills photography is essentially the capture of light using some piece of equipment and a type of recording medium - film, or a digital sensor. The trick is using the light to your advantage in whatever genre of the art you're working in. The greatest images ever captured all use natural or artificial light to create mood, contrast, ambience, and drama to subconsciously invoke some sort of emotional response in the viewer - whether it's street photography, nature, landscape, sports, or architecture and interiors.
Much of the work I do is pretty uniform in nature - shooting high end residential properties which need to be documented in an accurate fashion, with a balanced, & fairly neutral lighting style to show the features and flow of a house in a certain format used in brochures and MLS (Multi-listing sites such as Zoopla, Rightmove, etc.). This generally involves three distinct elements, which are combined in the post production process to give a balanced, final output: Ambient (natural light) frames, which provide a realistic view - showing the transition from light to dark, and any texture/depth, Flash frames throughout the space to illuminate the room evenly, and convey the colours of walls and furniture accurately, and then any additional lighting such as the lamps and pendants within the space. This works in the vast majority of spaces, but occasionally the room might call for some extra "oomph" that can only be supplied by specific lighting techniques and a bit of Photoshop magic.
This first example was shot on a horrible, gloomy day in the winter. There was no chance of sun anywhere, so I had to create the mood of a sunset. The first thing is to visualise a final result - a nice sunny, warm balcony on a summer evening in this case. The sun was replicated by me standing on the left of the frame, and pointing a 200w flash down at the table and chairs by stretching out as far as I could. Another frame was shot of the same scene without any flash. The next step was to mix, those two frames with a pre-shot sunset sky, and to blend them together carefully so that I, and the flashgun were painted out. Hey-Presto! A summer evening captured on a cloudy day in November. 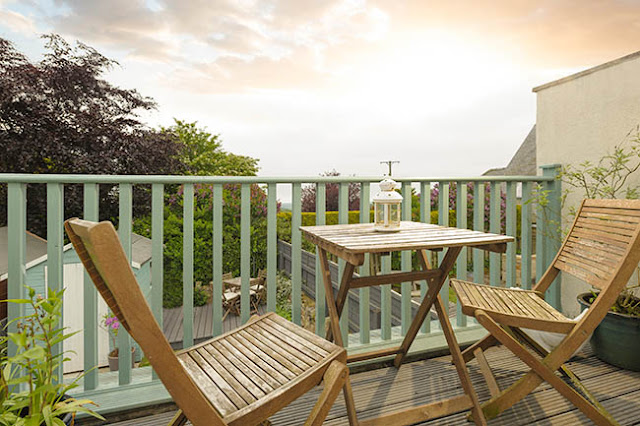 I only had one day to shoot this tiny listed building in Boldon, South Tyneside. The conditions were nice, but the small garden area was in complete shade, so required some lifting. To replicate warm sunshine, one of my bigger flash units was mounted on a tall light stand, filtered with a full CTO (colour temperature orange) gel, and pointed down at the scene from a distance which allowed the light to spread a bit. It's a very simple technique, but allows you to fill in areas which would never usually see the light of day such as back yards. Cheating perhaps, but effective for marketing shots nonetheless. 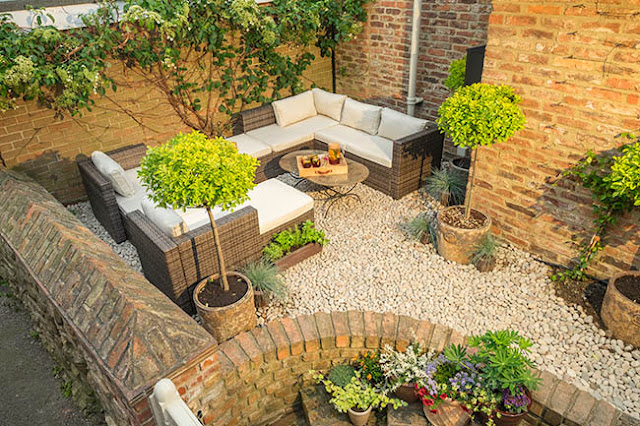 A Newcastle Quayside apartment this time. Once more the weather left a lot to be desired, so I had to improvise in order to create something a bit more appealing. I used the corner of the balcony to fire flash through the CTO gel into the room, and added a pale blue sky to the view of Gateshead riverside. 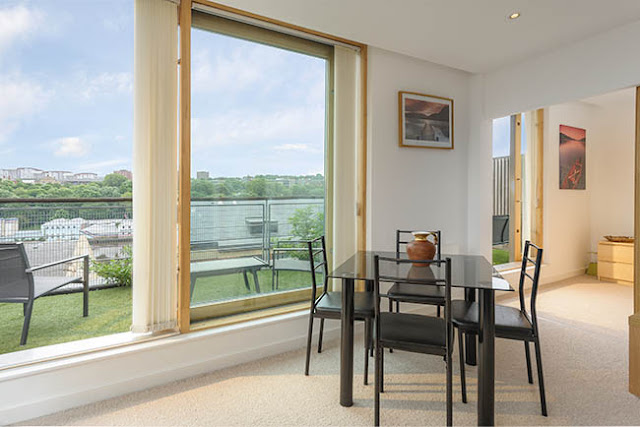 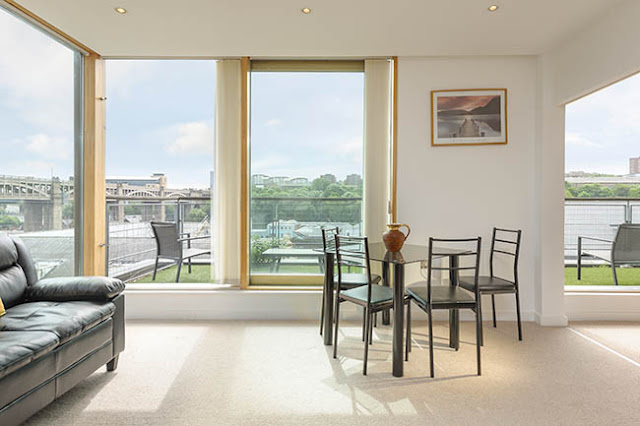 This hotel bathroom in North Yorkshire was almost entirely devoid of natural light, and there was no white ceiling to bounce flash off to fill the room, so the only recourse was to use directional lighting which always creates atmosphere in a frame. Luckily, there was the panelled glass frame to the right, so I shot a flash through there straight at the bath. It looks as if the light is coming through the open doorway, and creates nice shadows. the texture of the bamboo wall-cladding is accentuated also. Extra lights were added to bring out the colours in the green and grey ceramic tiles. 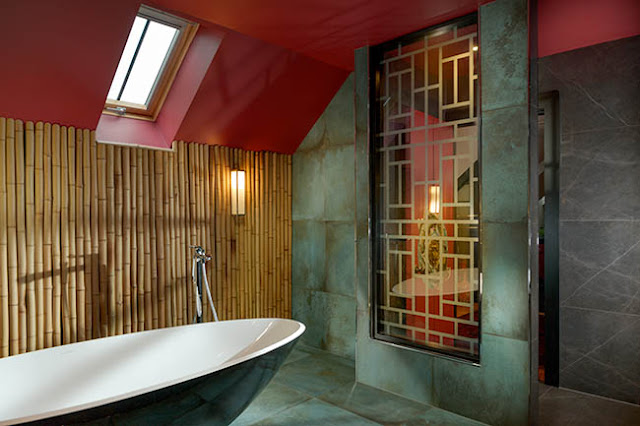 Using directional flash to draw attention to what is through a door opening worked well in this £2m Gosforth pad. Both the foreground and rear parts of the space were lit initially, then a frame was shot using a flash pointing towards the camera. This gives a distinct ray of light which draws the eye to the background space. I use this technique in many of my jobs nowadays in order to accentuate free standing bath tubs, kitchen island, and ensuites which are too small to shoot into directly. 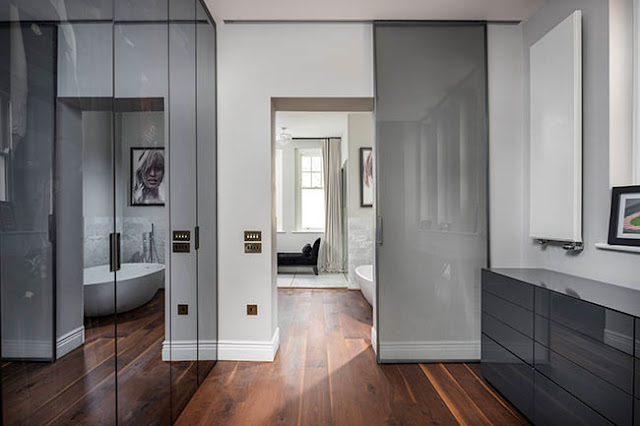 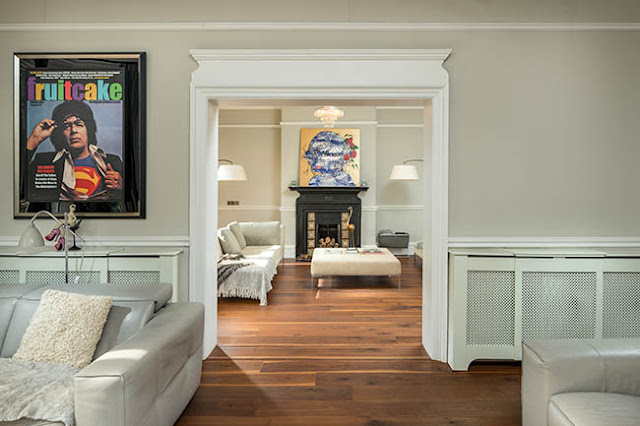 Holiday cottage shoots need to convey the glorious summer sun, but tend to be shot during rubbish weather, so the use of artificial sunshine tends to be frequent. The shot of a garden room extension below would have looked properly drab without a strong directional blast of flash fired through the blinds to give some drama to the final image. Almost any room can be livened up using this simple technique. 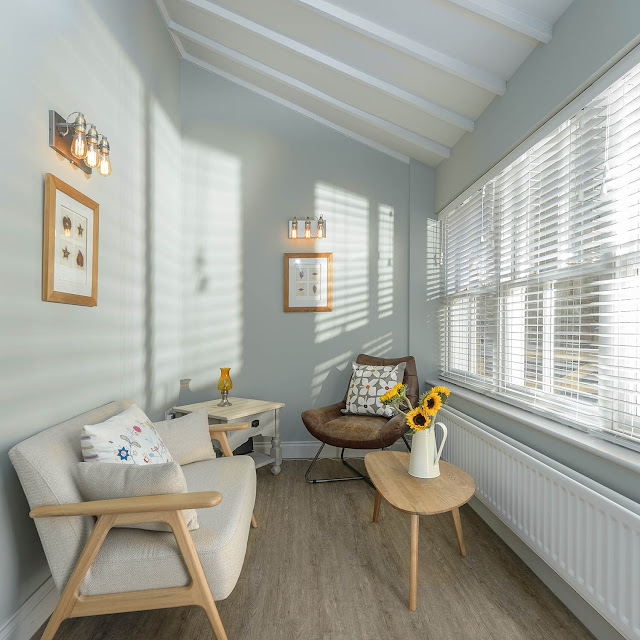