Villa on a budget 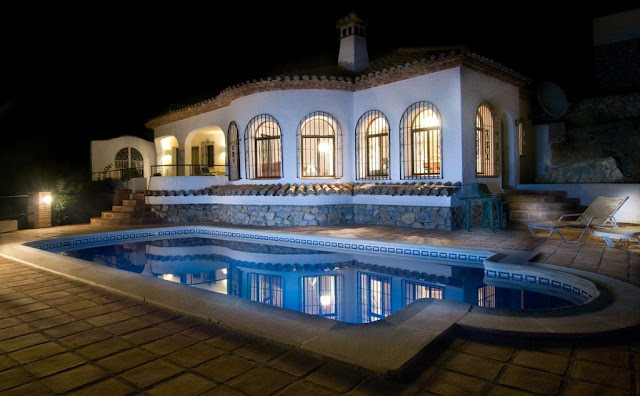 One of the dream jobs out there must be the Villa Photographer. There are a select few, who spend periods of the year shooting luxury property in Florida, Spain, Cyprus etc whilst living the high life in the sun. One of my ex-tutors at Newcastle College is one such lucky devil. He spends a portion of the year playing golf, and photographing holiday property in the Costa Del Sol. He’s a great photographer with a lifetime of commercial photography behind him. I used to assist him on the odd interior shoot, and learned a whole bunch of stuff about lighting rooms. He used to pay me in medium format tungsten-balanced slide film (which I never used), but the experience was invaluable. I have to say now though - I'm way ahead in shooting style. Sorry Boomer.

Anyway, being the father of two young children, I can’t go galavanting across the continent trying to pick up Spanish clients (it’s bloody hard enough here), so I have to make do with shooting the odd thing for fun if I’m staying there on holiday. This was one such property. I wasn’t even working in photography at the time. We went for a two week holiday up in the mountains behind Malaga, to a village called Salobrena. It was high in the hills, freezing at night, and riddled with mental insects.

One night, I decided to take a shot of our rented villa in the dark, so I set about preparing the outside. There were no kids, so it was tidy to begin with. I switched on all the interior and exterior lights, and set my camera (A 6mp Fuji S2 Pro as I recall) on to a table for support. I shot a few jpegs at different exposures, and this one had the most detail in it without blowing the windows entirely. My ancient eMac sorted out the retouching later. The shot was lit by ambient light only, so I had to add highlights and whatnot using Photoshop. Nowadays I would create light using flashes, and expose separately for the sky probably.

Not a bad little amateur shot I suppose. Anyway, should anybody know of a billionaire overseas property developer who wants someone to shoot their luxury condo’s over the winter – point them my way will you?