One thing I've been resisting to some degree over the last couple of years is introducing video footage into my workflow. It's an entirely different discipline to the property stills-photography that I've pretty much mastered over a six year period, requires significant, (and continual) expensive investment in equipment, and demands a new set of skills if it's to be done expertly, and professionally. The real estate world still lives in a bubble convinced that ultra-cheap is good enough - a fact backed up by the terabytes of evidence on various property listing sites, of agents marketing often very expensive homes using rudimentary tools such as old mobile phones and a complete lack of any technical, artistic, or creative input. The "walkthrough" videos that sprang from necessity during the early days of the Coronavirus pandemic have spread like the Delta variant to become the latest piece of crap produced by suppliers in the UK, and have become the latest thorn in my side.

The United States leads the world in property marketing, with professional imagery and slick video tours being a huge industry which can generate massive revenues for the people who work hard and do it well. The UK however, still operates largely on a "Del-Boy" basis, getting away with whatever is the cheapest option, and keeping a section of the gig economy alive by releasing limited-scope opportunities to blokes with cameras to make a bit of "Guvvy job" cash on the side, while charging hundreds of quid to the homeowners for poor quality results.

Anyhow, my holiday-home letting agency client Coquet Cottages recently reached out to determine whether I'd be in a position to supply videos  as part of my shoot process - nothing too complex to begin with - just a stylish 2 minute montage of footage for social media posts, and where applicable, a 15 second "hero image" showing a significant feature of the property and some element of movement within the frame (flames of a fireplace, or tree leaves blowing in the breeze for example). All video needed to be at least HD - 1920 x 1080 pixels, and obviously good enough for web distribution. Time to look at my existing gear.

My two main work cameras (Nikon D4 and D800) are both capable of shooting 1080p video at 30 frames per second, but this doesn't give any latitude when slowing down footage to smooth out any jerky movements. I'd also need an expensive DSLR-capable gimbal to create smooth footage. Doing a fair bit of research, and reading an industry-leading proponent's books unfortunately led me to decide against trying it with my current, ancient kit - which is perfect for stills work, but falls way short of the standards required for video. Some testing confirmed my suspicions, as the results weren't up to scratch. I needed recording capabilities of a minimum of 4K at 60 fps, and the only existing tools in my current arsenal were my iPhone 12 Pro Max and DJI Osmo 4 gimbal. Time to test them to the limit.

After a few pathetic attempts at shooting bits of my home, I decided to dive in and do a proper job during a holiday home shoot. Unfortunately, the day itself was one of the darkest days imaginable, in a house almost devoid of natural light. Some of the rooms upstairs had sufficient natural illumination to ensure noise-free footage, but the living space might as well have been a cave full of sodium lamps. The 4K output was awful - grainy, and devoid of the natural look captured by the human eye. Not as easy as I hoped it would be! The 20 minutes of footage comprised of scans, sweeps, dolly-shots, and cameos of details within each room. This had to be saved from the iPhone onto a solid state hard drive, and then imported into Adobe Premiere Rush - a toned-down version of their industry leading video editing software designed for Hollywood movie-makers and the like. Luckily, the workflow is quite intuitive, so my job of editing the footage down to a 2 minute montage with cross-fade transitions between clips didn't take hours and hours. I have the other industry -standard Apple Final Cut Pro software on my Mac, but even after 4 years of using it occasionally, I absolutely hate it's complexity, and the fact that I have to spend even more to buy extra software to convert the movies to mp4 files. The client seemed happy enough, and I shot both tall screen/ landscape versions to get some practice in. It's not ideal, as some lights cause flickering, there's often noise in the shadows, and the smoothness of the gimbal isn't perfect, but it meets the needs of phone-viewers for now.

It's 4 jobs later now, and I'm actually quite satisfied with the results that are coming out of my phone camera setup. I'm learning the processes organically, working through lighting issues using various techniques gleaned from my stills work, and if the volumes pick up, it'll be a good time to buy into a dedicated video kit so that I can expand things a bit, and improve quality immensely. My current choice is one of the Blackmagic Design dedicated video cameras, that can be adapted to use my existing Nikon or Fuji lenses. I'll need a bigger stabilising gimbal as well, but if it's self-financing it's a no-brainer.

The video file-sizes are too big to display on this platform, so you can always check my business Facebook page to see how they're improving over time. 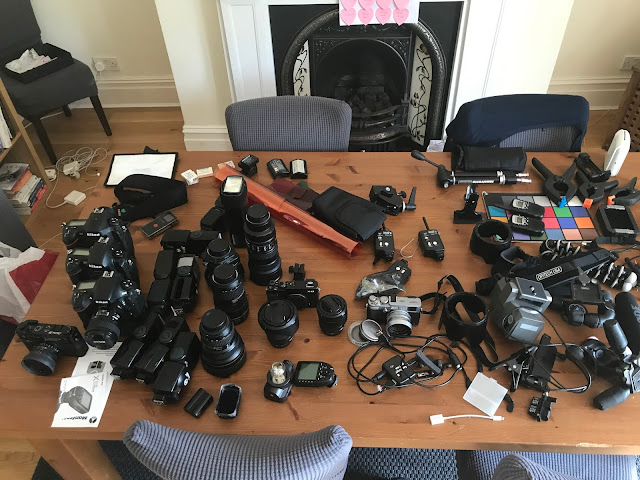